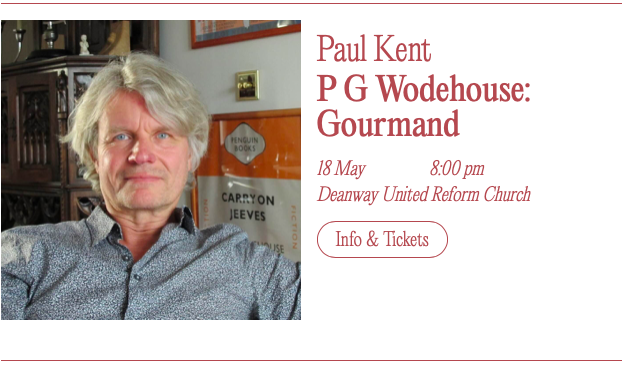 P G (‘Plum’) Wodehouse was quite the trencherman. From Chef Anatole’s dinners that stagger humanity to the humble brew in the school dormitory, from the steaming joints of beef in Simpson’s to a slice of dripping toast in Ye Olde Tea Shoppe, food is being sampled and savoured, gobbled and gourmandised just about everywhere in his fiction, from his first novel to the last. Reading Wodehouse can actually make you hungry, whether you share Bertie Wooster’s taste for Noix de Riz de Veau Toulousaine or Lord Emsworth’s penchant for a well-jammed roly-poly pudding. But it’s not all about consumption: Wodehouse is also quite the philosophiser on matters gastronomic. Does enjoying your food make you a happier – and better – person? Is dieting desirable? Forget all the self-help books you ever read: Plum has the answers – and he makes you laugh. In this talk, Paul Kent will serve up a feast of fresh scholarship, uniting his two lifelong passions. He advises you to dine prior to attending the talk.

Born in London, educated in Blackpool, Paul Kent read English at St Catherine’s College Oxford, staying on for a Doctorate which he submitted 25 years late. Lured away from academia by the BBC, he worked as Commissioning Editor of Drama and Features for the World Service and Radio 4, introducing the world to Bill Bryson and Frank McCourt among many other household names. Now retired, he earns an occasional crust as an audio director and has published books on Shakespeare, Montaigne, Voltaire and a guide to creative writing entitled ‘How Writers Write’. Since 2017 he has been joyfully immersed in the works of P G Wodehouse, and has produced a trilogy of literary biographies entitled ‘Pelham Grenville Wodehouse’ which has been described by Plum’s grandson, Sir Edward Cazalet, as “a masterpiece; an enthralling analysis of PGW’s writing and humour.” Deputy Chairman of the P G Wodehouse Society UK, 2022 marks 50 years since Paul first read Plum’s works.